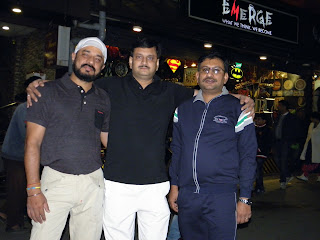 Chilling out on Mall Road


Day 1: Drive to Mussoorie from Gurgaon via Delhi, Ghaziabad, Muzzafarnagar,Saharanpur,Roorkey Chutmalpur,and Dehradoon, check at  hotel, park vehicles at the parking lot since the hotel does not have enough space-Clark Hotel. 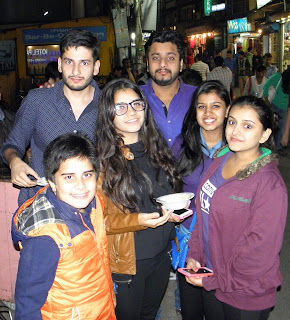 Mall Road, perfect place to grab hold of a bowl of Maggi!

It is important for visitors to book their hotels before hand. Web portals like Go Ibibo, offer this facility. After picking relatives from Ghaziabad, we started at seven in the morning and cover the 250+ kilometres to Mussoorie in seven hours. Frequent bottlenecks and jams make it a stop and go journey necessitating stopping for a cup of tea. You might also want to stop a t Dehradun to buy an extra bottle of water, or perhaps replenish your stock of chips. Yes, playing some nice and latest numbers on the car deck would be a boon since it makes the trip a little bit more interesting and fun.
Day 2: Stroll on the Mall, window shop, local sightseeing includes visit to one of the waterfalls, GunHill (We cut off a visit to Company Garden, the Wax Museum because we have three senior citizens with us). 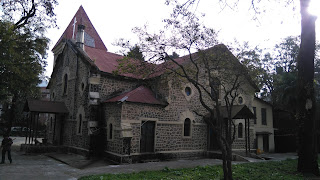 A walk on the Mall Road will turn up many surprises for the visitor each time one takes a stroll. The best time for me  is to take a walk alone in the morning before the others start to stir out of their beds! Life starts a bit late in the mornings, and goes on late into the night. The Central Methodist Church, is a must visit site for everyone on Mall Road. People often ignore stepping inside the compound because of the iron doors that appear to be locked but are not. It is amazing to know that the church was built in 1885 by the Revd. Dennis Osborne, although the trust had been formed in 1882. The earthquake of 1905 left its impact on the building as a few cracks became evident and four clocks had become loose and had to be removed. I, unfortunately was not able to gain access into the inside of the church building itself though I would have loved to see the interior, perhaps I will do so in my next visit. 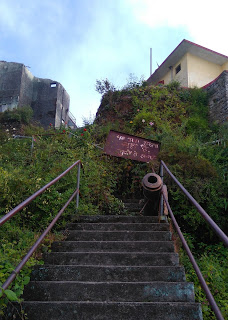 Gun Emplacement at Gunhill - is that a real gun? No, it looks like a drain pipe!

A visit to Gunhill is a must for those who have never travelled in a cable-car, and yes, for those who would like to go on a short but punishing 500 metres trek to a point that is said to command a vantage point over the rest of Mussoorie. While taking the punishing walk up the steep slope, I stopped to talk to a porter who was carrying some provisions for one of the food stalls on GunHill and he told me that the spot was at a height of seven thousand feet, a good thousand feet above the library crossing. I had taken a break from the family saying that wanted to take a short stroll, and instead decided to walk up to GunHill. Unfortunately since it was morning about a half past seven, the only people at the spot were a few stall holders who were preparing for the huge rush of visitors with hungry stomachs. Incidentally the only 'Gun' that could be seen was a poor replica that craved for some more imagination and creativity! 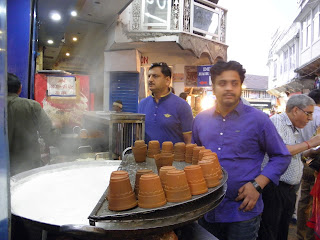 There is apparently a lot going on in Mussoorie and a lot to choose from. The itinerary for the second day had included a visit to Kempty Fall, about fifteen kilometres from Library. I was however not very comfortable and had misgivings about being able to return before four in the afternoon (a crucial time since the entry of vehicles into the Mall Road is not allowed after four) and instead suggested a visit to Bhatta Fall. Things were to happen just like I wanted. We exited from the Cinema Hall side and ran into the typical rush of vehicles coming from Dehradoon. Looking at the rush, we took a u-turn and instead decided to visit Bhatta Fall, a decision we did not regret since Bhatta Fall is relatively less crowded. Bhatta Fall is a wonderful place for families to spend together without the hustle and bustle of people jostling for a place in a pool that gets cramped as time passes. 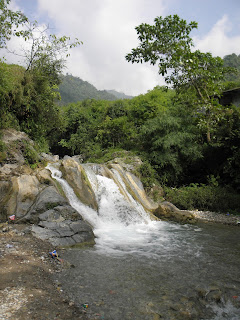 One of the many water falls at Bhatta

Started in 1918 Lovely Omelettes is a must visit for the gastronomist specialising in varieties. Friday, Saturday and Sunday are important days for students, because students are served a variety of omelettes irrespective of whether they have money or not! There is always a huge crowd of people waiting for a chance to sit inside the cramped but cosy little shop for a chance to bite into the omelettes. We chose the Cheese Omelette, a large omelette with a cheese stuffing in the middle cut into neat little squares. The clientele include famous personalities, in fact we were told by the proprietor that the gentleman and family that had occupied the eatery just before us was an important minister in a state government. 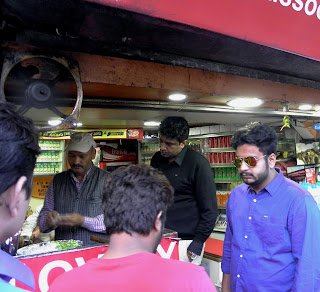 Waiting for a chance to taste Lovely Omelettes 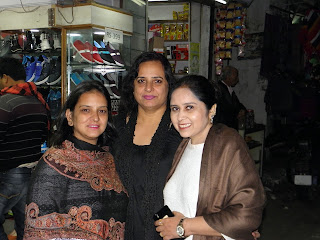 A time to get together on Mall Road 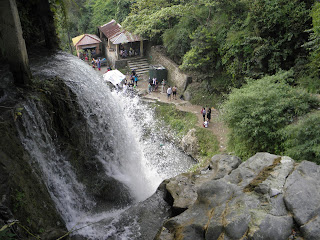 A fairy-tale waterfall at Bhatta Falls 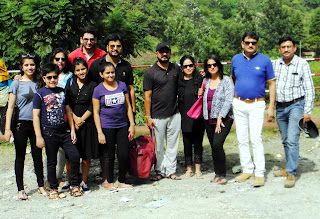 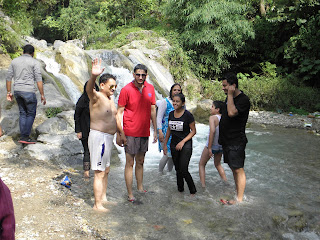 A dip in the clear rills of the Bhatta Falls will revive youth in many! 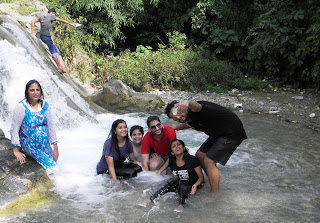 Oops, look out, that guy on the top left corner is doing a stunt! The waters of the Bhatta Falls will make people do all sorts of stunts. Of course ensure that your cellphones are splash-proof, if not dust proof!

Day 3: Back to Gurgaon, checkout from hotel, collect vehicles from parking lot aim to leave by ten in the morning, target-avoid too many stops, drive continuously.

It was a short but eventful trip, and sure, exhaustion had certainly made its impact, especially because of the altitude and of course the steep slopes. A suggestion for those coming from he plains, 'Do not overdo it, take it easy on the first day acclimatise yourself.' We did start at a little before ten in the morning, but then took frequent stops, the first about fifteen kilometres from Mussoorie to take photographs of the whole gang but then just when had become warmed up and ready for our special poses, a group of Langurs turned up. A few of us were able to shut ourselves in our cars, but then the three elderly ladies were not fast enough. One of us entered the car that was attracting the attention of the Langurs, and drove off only to turn back and pick up the others when the  Langurs had lost interest. The next pit stop was to buy chewing gum since the girls were feeling a little discomforted by the twists and turns on the hairpin curves. Pit stops such as these are a necessity especially when you have small children and elderly people with you. We finally reached Ghaziabad at six in the evening. I finally decided to take a break at my brother in laws place in Ghaziabad itself and decided to continue on the 57 kilometre journey to Gurgaon the next morning at six. 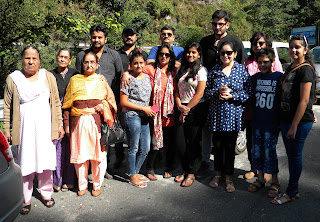 A group snap on the way back 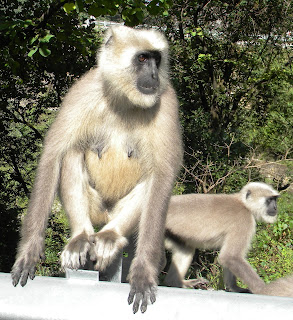 You need to watch out for the Langoors that are found in abundance on the way. Please be careful, and don't leave your doors and windows open, or else, they will run away with your food! Don't tell me, I did not warn you.

Posted by Rodrick Rajive Lal at 10:34

Labels: Places to visit in Mussoorie